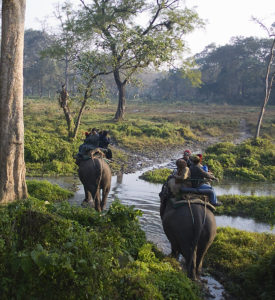 Jaldapara: Conquer the magically experience of nature in one of the best wild life sanctuary Jaldapara camp. This magnificent piece of land is maintained and established exactly for great Indian one-horned Rhinos. The rich and refreshing flora and thrilling ambiances of wildlife can be felt around the rain forest of mischievous Torsha River. This is spectacular view is largely covered by the lush green grasslands. The mesmerizing Malangi River dancing from east to west spreads its charm around the nearby areas.
Visitors can spot some of the rare and unbelievable species such as variation beagles, Pallas's Fishing Eagle, and the fearless ‘Shikra. These are not just all you may also find Lizards, cobras, peafowl, geckos, and spell-binding species of turtles at their most natural behaviour. Apart from all those people who like to do elephant and jeep safari they can get chance to fulfil their wish at Jaldapara. Opportunity for elephant safari in Jaldapara wild life sanctuary is truly very limited but if you love wild life and obsessive about jungles, elephant safari is a must do thing when you are in Jaldapara jungle, for your Dooars Trip. The elephant can take you deep inside the forest where a jeep or vehicle won’t be able to take you. The elephant crosses the water streams, passes through the dense woods, and takes you close to a one horned Rhino or a Bison. It is an awesome feeling and sight when you see a leopard at a few meters distance or a Chital nourishing her baby.

This Park is situated nearly 6 kms from the national highway number 31. The entry is nearly 15 kms the highway adjacent to a 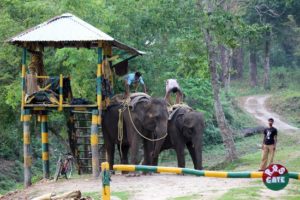 tea estate. Almost 88 kms from Siliguri and can be reached by two approach road one via Jalpaiguri another by way of Sevoke and Chalsa. This park is well-known for the breeding of the exceptional one horned Rhinoceros. Option of Elephant trip at diverse site developed by the afforest department is existing for the guest. Equally few new cottages are developed by the West Bengal Tourism department with food and cultural show. Elephant outing can help you mark the impressive spotted deer, bison, leopard, hog deer, reptiles, sambar, huge wild tuskers, wild boars and the rarest array of wild animals and birds with ample of peacocks. The parks and shelter remains clogged from 15th June to 15th September each year. Birding, angling, tribal tours are the minority of the options for visitors to take pleasure in and there can be other options like tribal tour, spiritual tour to Cooch Behar and Bhutan. The environment and the weather make it an authentic glory for lovers of eco - tourism and nature. There are over half a dozen of watchtower like Medhla, to assessment wild animals as animals arrive frequently to the salt lake just under the tower or the water body close to these towers. Dreamway destination manage the stay or safari or trip to watch towers of the park like Chandrachur Watch Tower, Jatraprasad Watch Tower, Chukchuki Bird tower, tribal tour Medhla Tower, Rhino Observation Point, and so on. 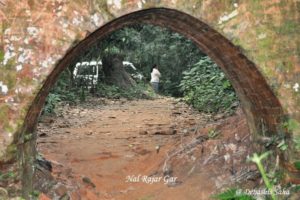 Chilapata Forest is a solid natural forest close to Jaldapara National Park in Dooars. It is just 20 km from Alipurduar town and 95km from Jalpaiguri town is within the Jalpaiguri District. A drive through the forests is an interesting experience. Sighting of elephants are almost regular. River Torsha runs through the sanctuary. The jungle safary gives a great experience to all wild life lovers. It is mainly an impenetrable forest in contrast to Jaldapara grassy forest. The tourists can entered the forest from Kodalbasti beat far from Chilapata range. There are five transport cars are available for safary, each full car booking charge you Rs 1600. The travellers may book the safary over the phone which will add bit additional cost to travellers. The forest is mainly savannah sheltered with giant elephant grasses. The wildlife, in addition to one-horned Rhinos, consists of wild Elephants, royal Bengal tigers, Sambhar, Deer, Barking Deer, wild Pig, Spotted Deer and Hog Deer, Gour and several numbers of Birds, Peafowls. There are two timing for the safary, one from 5:00 am and another from 3:00 pm. The jungle is full of big and thick trees and Torsa River flowing by her side dividing jaldapara jungle. The tourists also can enjoy Rabha folk dance ceremony by locals. It was worth having the tour no doubt.

Something about Nalraja Garh
The chief attraction at Chilapata is the "Nalraja Garh". There exist the remnants of an old fort in the opaque forests at Chilapata on the east bank of the Torsa River a few kilometres south of the Indo-Bhutan perimeter. It is widely known as “Nal Rajar Garh”. The Britishers called it “the Mendabari ruins”.

Overview of Rajbari, from Cooch Behar 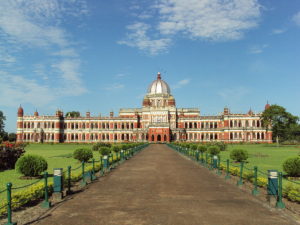 Cooch Behar Rajbari is one of a historical palace to visit with rambling lawns and some historical artefacts inside some of the rooms. The Cooch Behar Palace in Cooch Behar City, West Bengal is painstaking a landmark there. Also identified as Victor Jubilee Palace, it was deliberate on the model of Buckingham Palace in UK in 1887, under the supremacy of King Nripendra Narayan.
The Palace, noted for its grace and grandeur, is a property of The Mantri's. Stimulated by the model of classical chic of Italian Renaissance, this grand fortress has its architecture enthused from different European monuments. The main entrance looks like the St. Peter's Church in Rome. The rooms are crammed with beautiful paintings, both on the walls and the ceilings.

Architecture of Rajbari
The palace is a brick built double storey structure made in a classical Western technique. It is extend over an area of 51,909 square feet. The length of the structure is 395 ft, while the wide is 296 ft. The palace is fronted on the land and first floors by a series of beautifully arcaded verandas. The bastion is 124 ft high from the ground, having modes in a Renaissance style. The structure includes more than 50 rooms of diverse dimensions which comprise the dressing rooms, bedrooms, billiard room, kitchen, and dining hall, dancing hall, library, Tosha khana and the ladies corridor. Also, the palace is renowned for its Durbar Hall.

Rajabhatkhawa is one of the small towns situated on the outskirts of Buxa Tiger Reserve. It is the main entry to the tiger reserve. 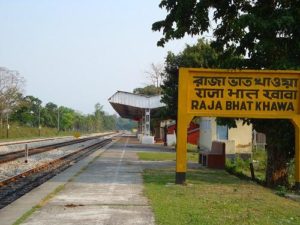 A Vulture Breeding Centre has been developed at Rajabhatkhawa by the West Bengal Forest Development Corporation (WBFDC). The place is surrounded by dense forest which gives an unmatched beauty to it. The green forests, grey hills, cascading river, roar of the tigers make Rajabhatkhawa an ideal spot for experiencing jungle tourism at its best. You can visit the nearby Buxa Tiger Reserve. Entry permits for the Tiger Reserve are issued from Nature Interpretation Centre at Rajabhatkhawa. One can go for a 5 km trek to Buxa Fort. You can visit Sikiajhora from Rajabhatkhawa via Damanpur where you can experience a boat ride through the Buxa Tiger Reserve. The forest of Chilapata and Jayanti is also worth a visit. 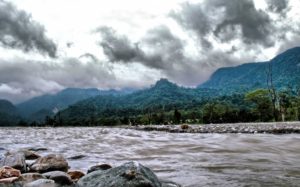 Situated on the periphery of Buxa Forest is a attractive jungle village along the River Jayanti. Jayanti River forms a natural border with the Bhutan hills, the hills on the Eastern Side of the river identified as the Jayanti Hills and the small villages on the western side recognized as Jayanti village are named after the river Jayanti. 30km from Alipurduar Jayanti is frequently referred as the ‘Queen of Dooars’ because of it’s astound view and soothing ambiance.

Underneath the vibrant bionetwork is the Dooars oldest town Jayanti village but nowadays you can’t see the town but as an alternative what you see is a village which is gradually vanishing away as the time passes by. In Jayanti nature has flourish and is at in its zenith where the jungle is green and the wildlife is in copious. Moreover, the river Jayanti relics dry most of the year but when the water level rises, listening to the tempting sound of the flowing river, tweeting of unknown birds, sweet bouquet of nature and refreshingly cool breeze at Jayanti will make you feel completely revitalized. The gravel along the river bed of Jayanti attaches a supreme beauty to the place. The journey towards the Jayanti in itself is a wonderful experience driving through the intense Buxa Tiger Reserve has allured many travellers to travel to Jayanti. Spotting a herd of Elephant, Barking Deer or plenty of Peacocks are most widespread sights on the way to Jayanti. A holy place known as Pokhari is nearby Jayanti apart from its spiritual belief this spot is a great place to see the large number of big-sized Magur and Turtle in the waters of the Pokhri and the beauty of this place has definitely something which has a refreshing effect. Another interesting place where you can go is Mahakal Cave situated near Bhutan border this cave temple is devoted to Lord Shiva and many guests visit this cave during Maha Shibratri.

Immerge yourself in the diversified and rich diversity of wild life of Jayanti. surrounded by the wooded hills while overlooking the beautiful white river bed, Jayanti has wooed many people’s heart the bewitching charisma of Jayanti is sure to leave you spell bind.. 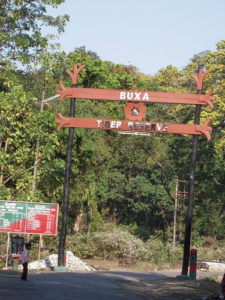 The Buxa Tiger Reserve cover the area of 759 sq. kilometres was conventional in the year of 1982-83 at the north eastern corner of West Bengal adjoining Assam and Bhutan. The core area of 315sq.kms approximately the BuxaDuar Fort was stated a National Park in the year of January 1992.

This tropical rain forest having an annual rainfall exceeding 5000mm has 150 species of plants and a variety of creepers, orchids, grasses, bamboo and cane. Trees like Teak, sal, simul, sishu are found in great numbers.

Home to a large number of nature and plants species, Buxa National Park is one of the most attractive places in Jalpaiguri, for travellers with an impudent mindset. Rambling over acres of land in the Alipurduar sub-division of Jalpaiguri district in West Bengal, Buxa Tiger Reserve (BTR) is situated inside the national park and spreads over 760 square kilometers. While the place shares its northern edge with the worldwide border of Bhutan, the Sinchula hill range defamation all along the northern side of BTR and the eastern boundary touches the state of Assam. 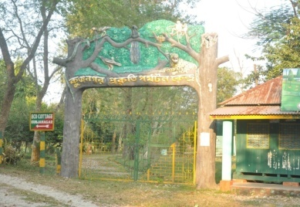 Wild animals are not found always, but sitting on the Watch Tower you will feel nature as your own. There is arrangement for picnic. So day time remains lively. The evenings are beautiful. If you go up the Watch Tower in a moon-lit night, you will not like to come down. There is electric wire fencing for safety from elephant attacks. For night stay there are Forest Bungalow and Tower House.

When Is The Best Time To Visit Kunjanagar?

Kunjanagar is pleasant during the period of January to April. Temperatures range between 36C° and 13C°. Rainfall does not usually happen during this period. Hence, it is considered the best time to visit the place. The period from May to October witnesses heavy rainfall and is not recommended for visits. November and December can be cold. However, this period is devoid of rainfall and hence, is a good time to plan your visit to Kunjanagar.