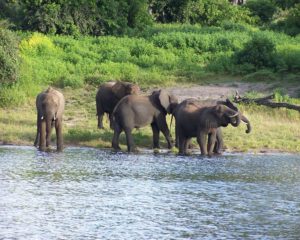 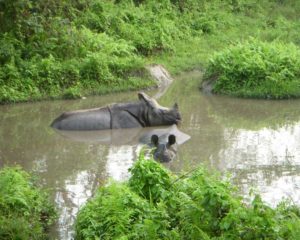 Mech Tribes (Bodos) and Toto tribes are the most native resident of this area (pre-1800). Totopara was this places name back then. In 1941 for the purpose of protecting the Indian one-horned rhinoceros, Jaldapara Wildlife Sanctuary was established. It was declared as Jaldapara National park on May 2012.

On the banks of the Torsa River and at the foothills of the Eastern part of the Himalayas in West Bengals Alipurduar district is situated Jaldapara National Park. Jaldapara holds an altitude of 61 m and spreads across 216.51 kms filled with grasslands and patches of marshy forests. Due to it's immense variety of Flaura and Fauna it was declared as a sanctuary in 1941. One horned rhinoceros is a highly rated endengared species of which Jaldapara holds the second highest population. Between Jaldapara and Buxa Tiger reserve Chilapata stands as a gateway for elephants. The great Gorumara Forest is only 70kms traveling distance from Jaldapara National Park.

About Flaura and Fauna forest
The jungle is mostly savannah covered with lofty elephant grasses. The core attraction of the shelter is Asiatic one-horned rhinoceros. The shelter holds the large number of rhinos populace in India after Kaziranga National Park in Assam. The other animals consists of elephants, Royal Bengal Tigers, barking deer, deers, sambhar, spotted deer and hog deer, bisons , wild pig,. The wild life, in addition to the famous Great Indian One Horned rhinos, consists of hog deers, Royal Bengal Tigers, wild pigs wild elephants, deers, swamp deers, bisons. Some atypical species like the hog-badger and the hispid hare are also found here. Apart from wildlife viewing, there is scope for unusual holiday activities like elephant riding and laid-back strolls through the towering grass.

Jaldapara is rapture for bird watchers. It is one of the most beautiful places in all over India, where the Bengal Florican is sighted. The other birds to be found here are the Crested Eagle, Pallas’s Fishing Eagle and shikra, besides Jungle fowl, peafowl, patridges, Bengal Florican and lesser cobras, Pied Hornbill. Many other types of the animals are rare like – the Asiatic one-horned rhino and elephants in Jaldapara shelter.

A thrilling elephant safari is organized in the early morning from Hollong to offer the superb beauty of the vast pasture of Jaldapara. The elephant trip is the best feasible way to discover the shelter with the rare sight of Indian Asiatic elephants as well as rhinos. The jeep safari within the shelter is another main attraction.
Hollong Eco Village Resort is a hotel in Jaldapara which proudly presents you a great stay by the forest where you get a complete ambiance of the forest very closely.

Elephant and jeep safaris are a must if you visit Jaldapara. As it is the best possible way to experience the natural habitat that the amazing Jaldapara stores for you.

The birds of Jaldapara

Sit with a binocular and see the majestic flight of Racket-Tailed, Drongo Hornbill, along with Asian Paradise Fycatcher. Enjoy the splendours of sun set afar the cosmic grassland of Jaldapara from you Bungalow deck. Jaldapara is extremely rich in avifauna because of varied terrain, medley of vegetation and rich bug life. More than 270 varieties of birds are found in diversity of habitat- Grassland, water bodies, and woodland. The wide-ranging tree jungle and affluent equivocation plant growth on the jungle floor offer ideal set for many woodland birds, such as Hornbills, Woodpeckers, Barbets, Parakeets, Drongos , Green Pigeons, Cuckoos, Orioles, , Babblers, Thrushes and many more. Brahminy ducks, Goosanders, along with whistling teals are wintry weather visitors. Usually the water birds are bulky as well as little cormorant, Indian Shag, Moorhen, White Breasted Waterhen, Spur Winged Lapwing, Darter, Lesser Adjutant Stork, Egrets, Pied Wagtail, and more. The night huntsmen in Jaldapara are the owls and the nightjars.

The hunters in Jaldapara are the nightjars and Owls. Crested serpent Eagle is one of the most common raptorial birds. The other main birds of prey are Pallas’s Fishing Eagle, Pied Harrier, Common Buzzard, Kestrel, Sparrow Hawk and many more. An assortment of birds, typical of grassland as well as open nation, can be seen from watchtowers viz. Bee-eaters, Bulbuls, Hill Mynas, Shrikes, Doves, Hoopoe, Larks, Finches also Rollers. Call of the Red jungle fowl is as regular as the melodic sound of crickets. Shaheen Falcon, Bengal Florican, Great Pied Hornbills, Large Green billed Malkoha, Forest Eagle Owl, White Rumped Vulture, Lesser Adjutant Stork and Black partridge are the scant bird kind set up in the shelter. Some lucky visitors can see the Peacock displaying his full array of feathers during the procreation season.